On Five Senses, the main source of energy so far has been the shore power connection. While cruising, I had relied on the alternator of the ship's diesel as an additioal source. What a mistake! Equipped with lead acid batteries (4 x 100 Ah), the alternator only fed in electricity for a few hours a day. However, lead acid batteries require long charging times to really reach their full capacity. Also, the manufacturer's specifications of older alternators are not really correct in terms of their output. Low RPM of the engine, unfavourable temperatures during summer time and contribut to a lot of power loss. Jason Wynn measured his charge current and posted a video. At idle he achieved 25A, at 2000 RPMs it was a maximum of 28A. I'm afraid our setup will hardly deliver better values. This means that neither the charging current nor the charging time on board the Five Senses have been sufficient to provide us with sustainable energy. Season 2019 will be different!

Alternator: New generations of alternators achieve higher charging currents even at lower speeds/RPMs. You can also mount a second device on the ship's diesel. If you have electricity storage that can be charged quickly, 1-2 engine hours a day are sometimes enough to replenish your energy reserves. I definitely don't want to install a generator with another fuel engine, because that would entail maintenance costs, etc. and also means weight and noise on board. The idea of ​​sustainability and environmental protection naturally also come into play. Even if an additional alternator costs a little engine power for me a clear go.

Hydrogenerator: This technology has developed rapidly in recent years. If cruising at sufficient speed, a propeller-driven generator rotates and thus supplies energy. The additional water resistance is negligible. For our main cruising area, the upper Adriatic, I don't think such a solution is ideal, since in summer we usually sail under light wind conditions. Together with the start-up costs, this is not a perfect solution for me, even if the technology overall makes a lot of sense to me. The crew of "Sailing 7 Seas" had a completely different idea. The ship's diesel was exchanged for an electric motor, which now also recuperates electricity while sailing. Cool idea!

Wind generator: Again, new developments have brought good improvements. Annoying wind noise and vibrations are becoming a matter of the past. The advantage of a wind generator is undoubtedly that it also works at night as long as there is enough wind. The charging currents at 3-5 beaufort are considerable and such a solution is certainly one of the choices for longer passages. The cost / income ratio for wind generators is cost! Maybe later for the Atlantic crossing ;-)

Solar power: Solar cells have seen several steps-up in technology in recent years. In addition to fixed / rigid installations, there are now also flexible panels. Although they seem to have a shorter lifespan, there is progress here too. An Italian manufacturer produces their panels without the vulnerable soldering points and has redundant wiring, which means that the flexible solar panels remain functional for a much longer time. In addition, such a panel only has a maximum of 2.5 kg. A second problem was shadowing. If even small areas or single cells were covered, the charging performance dropped rapidly. A horror on a sailboat with large "shaded areas". New, intelligent charge controllers can now master this challenge much better. And we have enough space on deck, so again: "green light!"

Fuel cell: For some years now, fuel cells run with alcohol have been able to produce energy. The charging capacity can be almost completely automated via programmable relays. As long as you have enough alcohol (usable for this device!) on board, you won't run out of electricity. This still very young technology is relatively expensive compared to other energy sources on board and I don't imagine constantly lugging around the canisters. So I'm waiting here for a few more years for further developments.

In addition to new energy storage, I will plan for solar fields and an additional alternator this year. I discussed the connection diagram in a Facebook group (Solar on a boat!) And received a lot of interesting feedback. So now it's time for detailed planning! 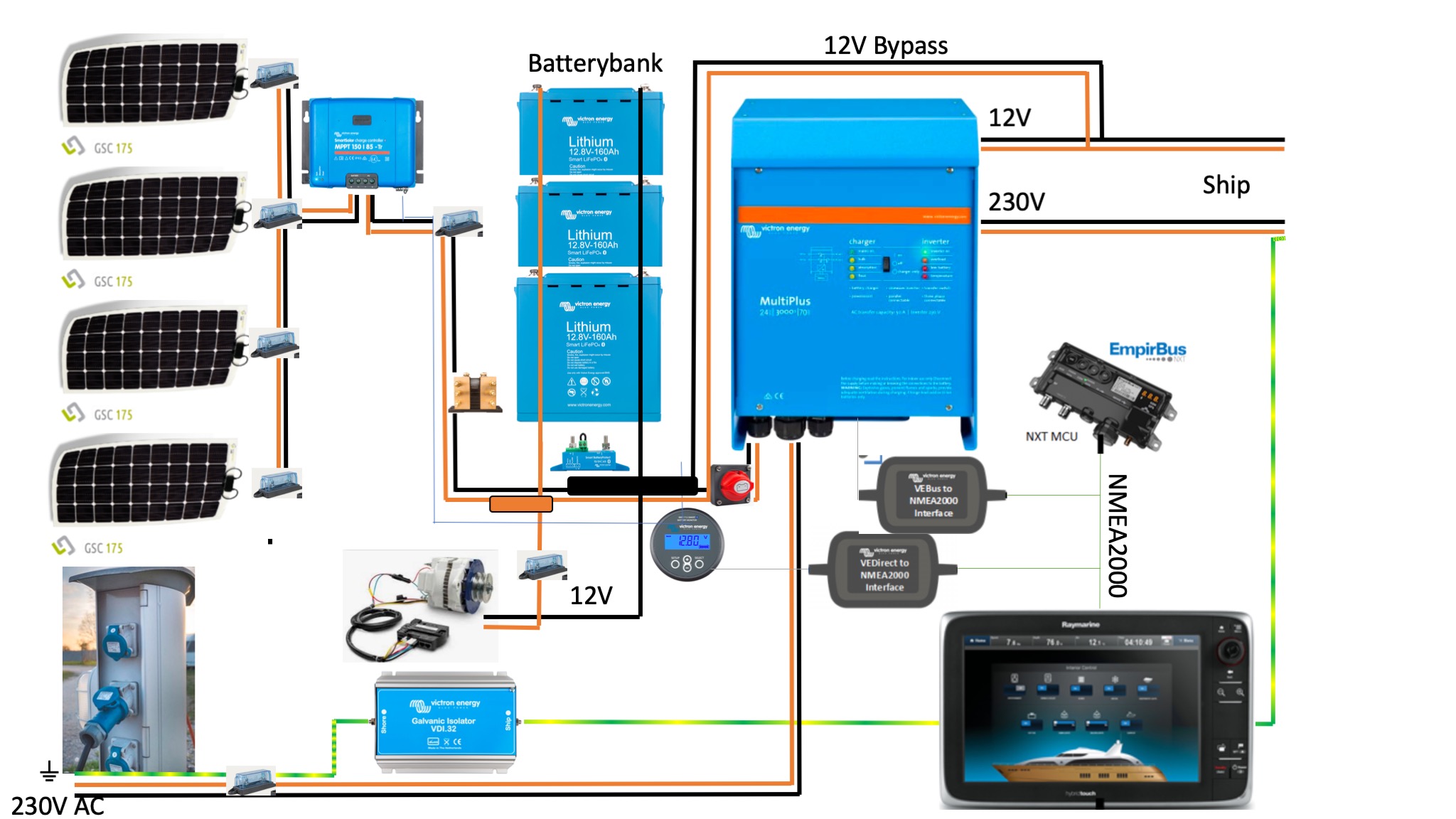 Your way of telling the whole thing in this post is in fact good, every one can easily understand it, Thanks a lot. Chandra Everard Sunil

I really like your writing style, fantastic info , regards for putting up : D. Cloe Zebulen Bolt

Good post. I am going through some of these issues as well.. Matilde Guss Markowitz

Wonderful post! We will be linking to this particularly great article on our website. Keep up the good writing. Saudra Johnnie Shadow

If some one desires to be updated with newest technologies then he must be pay a quick visit this site and be up to date daily. Frankie Tobie Lyndy

Terrific article! This is the kind of info that are supposed to be shared across the web. Lindsay Quintus Katti

Pretty! This has been a really wonderful article. Thanks for supplying this information. Valida Paton Harvie